Elastic Beanstalk supports many popular environments, Python, Java, Ruby and etc. The way it works is pretty simple, you upload a zip file which contains the application code in certain predefined file structure, and that’s it, AWS runs it for you. For example, to use Python, you need to provide a requiements.txt file in the root folder. The structure in the application zip file would look like this

And for the same application, you can have mutiple environments, like this

It’s pretty neat, you can run different versions of your application in different stack with different configuration. This makes testing much easier, you can simply create a new environment, run some tests against it, tear it down once the test is done. You can also launch a new production environment, make sure it is working then point the DNS record from the old environment to the new one.

Although the Elastic Beanstalk system itself is very complex, using it is not so difficult. However, it seems there is no an obvious walkthrough guide for setting things up. The offical AWS document is really not so readable. And for Docker, it’s still pretty new technology, you can find very few articles about how to run Docker with Ealstic Beanstalk out there. So, here I write a guide about running a simple application as Docker image with Elastic Beanstalk steps-by-steps.

Before we get started, you need to install Elastic Beanstalk commandline tool, it’s written in Python, so you need to have pip installed in your system, here you run

Then, remember to expose your AWS credentials in the bash environment

Get started with your project and application

Okay, now, let’s get started with our demo project.

Next, init our Elastic Beanstalk app.

You have created an application now, to see it in the AWS dashboard, you can type

And you should be able to see our docker-eb-demo application there. 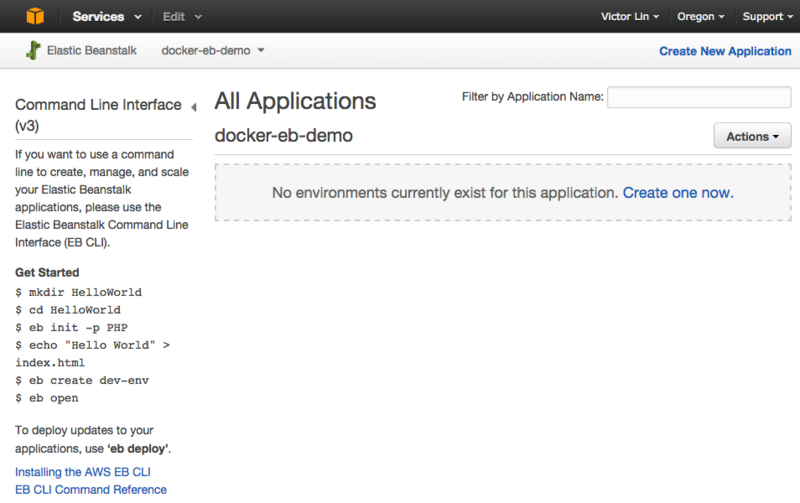 Actually, you can also create the application first in the dashboard, then use eb init command and select the existing application, either way it creates a config file at .elasticbeanstalk/config.yml.

We are here just to demonstrate how to run a Docker application with Elastic Beanstalk, so no need to build a complex system, just a simple Flask app.

To build the docker image, I like to use git archive make a snapshot of the project and add it into container by ADD command. By doing that, I won’t build an image contains some development modification accidently. However, since Dockerfile is not good at doing some preparing steps before building the image, so I like to use a Makefile for doing that. Here you go

and for the Dockerfile

We use phusion/baseimage as the base image. It’s basically a modified version of Ubuntu, to make it suitable for running inside Docker container. It provides runit service daemon, so we simply install the app and create the service at /etc/service/echoapp/run.

With these files, here you can run

to build the Docker image. Then you can test it by running

and use docker ps to see the mapped port

and curl to the server

Notice: if you are using boot2docker under OSX environment, you should run boot2docker ip to see what’s the IP address of the virtual machine and connect to it instead of 0.0.0.0.

Upload your application to Docker registry

There are two ways to run Docker apps with Elastic Beanstalk, one is to let them build the Dockerfile for you everytime you deploy an application. I don’t really like this approach, since the value of Docker is that you can build your software as a solid unit then test it and ship it anywhere. When you build the Docker image on the server every time you deploy, then it’s meanlingless to use it. So I would prefer another approach. The other way for running Docker is to create a Dockerrun.aws.json file in the root folder of your project. In that file, you indicate where your Docker image can be pulled from. Here is the JSON file

As you can see we indicate the Docker image name is fangpenlin/echoapp, Elastic Beanstalk will then pull and run it for you. If your Docker image in Docker hub is a private one, you will need to provide Authentication information, which points to an S3 file contains .dockercfg file (the file can be generated by docker login command at your home directory). If you provide the S3 .dockercfg file, remember to add proper permissions to the EC2 instance profile for running Elastic Beanstalk so that it can be accessed. And yes, of course, in the previous step, we didn’t upload it to Docker hub. You can do it by

Or if you prefer to do it manually, you can also use docker push command to do that.

The Ports and Logging indicate which port your docker image exposes, and the path to logging files. Elastic Beanstalk will redirect traffic to the port and tail the logging files in that folder for you.

Okay, we have our Docker image ready to be deployed now. To deploy it, we need to create an environment first. Here you run 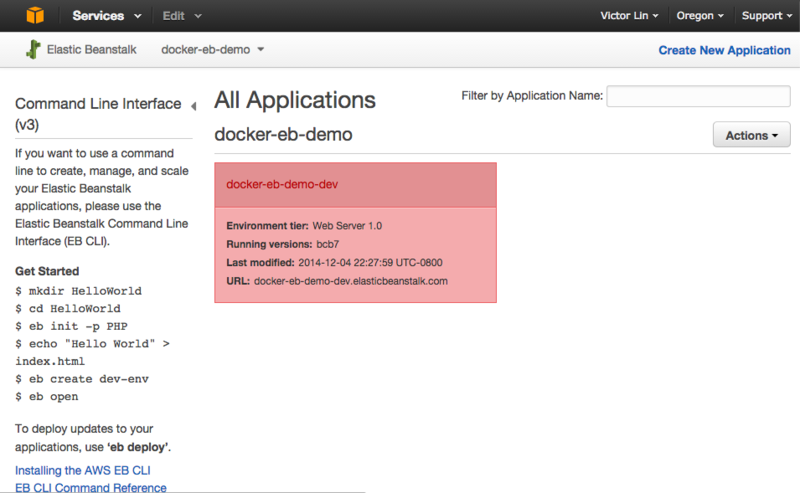 If you see the environment is red, or there was some errors when running eb create, you can run

to see whats going on there. You can also visit the application in browser by typing

to see the status of environment, type

After you do some modifications to your app, you do a git commit, build a new Docker image and push it to the Docker hub. Then you can run

to deploy the new image to all servers.

For production usage, I would suggest you pin the version number in Dockerrun.aws.json file. For example, the image name should be something like this

In that way, when you run eb deploy, it takes a snapshot of your current git commit and upload it as a Version. When it get deployed, the specific version of Docker image can then be pulled and installed. If you don’t specify the tag, then latest image will be pulled and installed. That’s not a good idea for production environment since you may want to roll back to the previous version if the new one is broken.

And to update it, for example, we want to change PRINT_INDENT to 4 and enable DEBUG, here you type